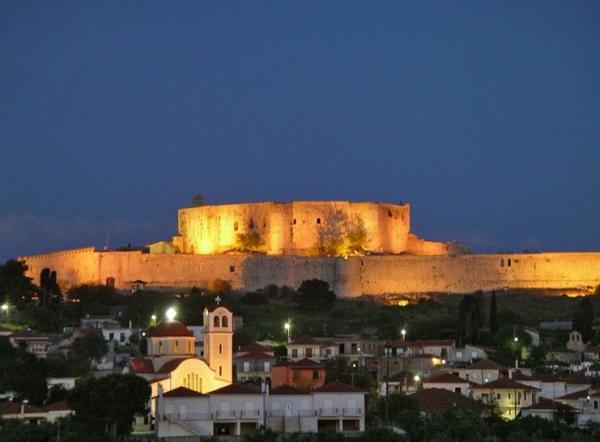 Chlemoutsi Castle is located in Kastro, the village of Municipality of Kyllini, in the westerner side of Peloponnisos. This is built in the top of a hill that dominates the plain of Ilia. The castle was founded in 1220-1223 from the souvereign Godefreido A΄ Billeardouino and it constituted the more powerful fortress of occidental principality Achaia that knew particular acne at the season of Billeardouinon. In order to manufacture it Godefreidos comes in conflict with the catholic lot of Achaia and it used the revenues for his construction. The new castle named by the founders of Clermont, in the Greek translation Chlemoutsi, while Enetians later called it Castel Tornese because it was considered erroneously that here was found the occidental mint of tornesians.

Clemoutsi Castle has been built in a strategic position with extensive view in the plain of Ilia and the Ionian Sea protected the capital of principality Andravida and the famous Glarentza harbour.

In these days Chlemoutsi continues maintaining his intense occidental character. From the later conquerors only the Turks appear to interest itself for his modernization and made small extent work, mainly for the adaptation in the use of firearms of arms. Thus the castle remains one from the more important and maintained fortresses of Greece and constitutes exceptional architectural sample.