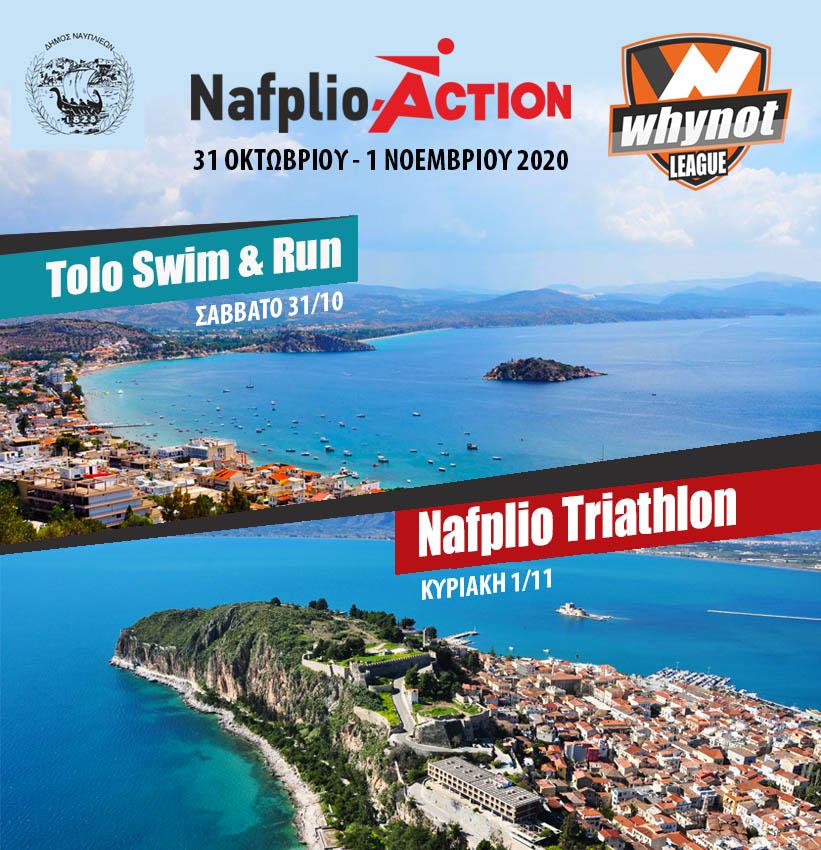 On October 31th & November 1st, the Municipality of Nafplio (DOPPAT), and the company whynot are organizing the multisport race under the name Nafplio Action (triathlon, aquathlon, swimming and running races) in the beautiful areas of Tolo and Nafplio. The 1st day, swimming and running events will take place in Tolo, one of the most touristic destinations of Argolis, while on the 2nd day, triathlon and aquathlon races are scheduled at the seaside of Nafplio.

Tolo
Tolo is a pretty seaside town with about 2,500 inhabitants. It is located a short distance south of Nafplio and attracts many tourists during the summer months. The natural surroundings of the town with its beautiful beaches create a picturesque, romantic and idyllic picture. Opposite the port, one can admire the three little islands, Koronisi, Romvi and Daskalio. The main occupations of the residents of Tolo are primarily tourism and fishery. Tolo is renowned for its excellent tourist infrastructure, impressive natural beauty as well as its warm hospitality of its inhabitants, qualities which attract visitors from around the world.

Nafplio
Nafplio, the capital of the prefecture of Argolida and the first capital of Greece, is a picturesque city with a significant history and deeply rooted cultural traditions. Built at the foot of two forts, Palamidi and Acronafplia, today it has a population of around 19,000 inhabitants and a growing tourism. Nafplio is a neoclassical 19th century city with great tradition and centuries of history. Nafplio combines a set of images that fascinates visitors. The main source of income is tourism as it is a popular destination all year round. The city operates a commercial port that exports mainly agricultural products of the hinterland of the county.